A guide to newspaper databases available through the SU Libraries system

Syracuse University students and faculty have access to a number of indexes and full-text article databases that offer New York Times newspaper coverage, including these listed below:

Full-text coverage of hundreds of U.S. national and regional newspapers including:

Full page scans of international, national, and regional newspapers.  Coverage is a rolling archive includes the most recent 30 to 90 days only.  Titles include:

To browse a recent two to three weeks of articles from a set of major U.S. national and regional newspapers (with ability to quickly jump into specific sections of these papers), connect to Factiva, then click News Pages on the top toolbar. 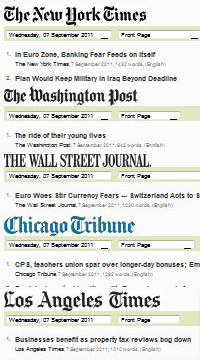 NOTE:  Factiva's license at SU has a five simultaneous user limit, so if turned away when accessing this database - take a brief break and try again shortly.  Even when large groups access Factiva, it is rare for five people to access this BOTH at exactly the same time and also for exactly identical duration of use.  You are welcome to report persistent Factiva database turnaway problems to the Public Communications Librarian at mjpasqua@syr.edu (315) 443-3715