This guide, and the accompanying physical display in Bird Library, were curated by graduate students Ocean Noah (M.F.A. candidate in creative Writing, College of Arts and Sciences) and McKenzie Rybka (M.M. candidate in vocal performance, College of Visual and Performing Arts). Ocean works in the Libraries' Department of Learning and Academic Engagement at our Information Desk, and McKenzie works in the Libraries' Department of Research and Scholarship with our collections team. 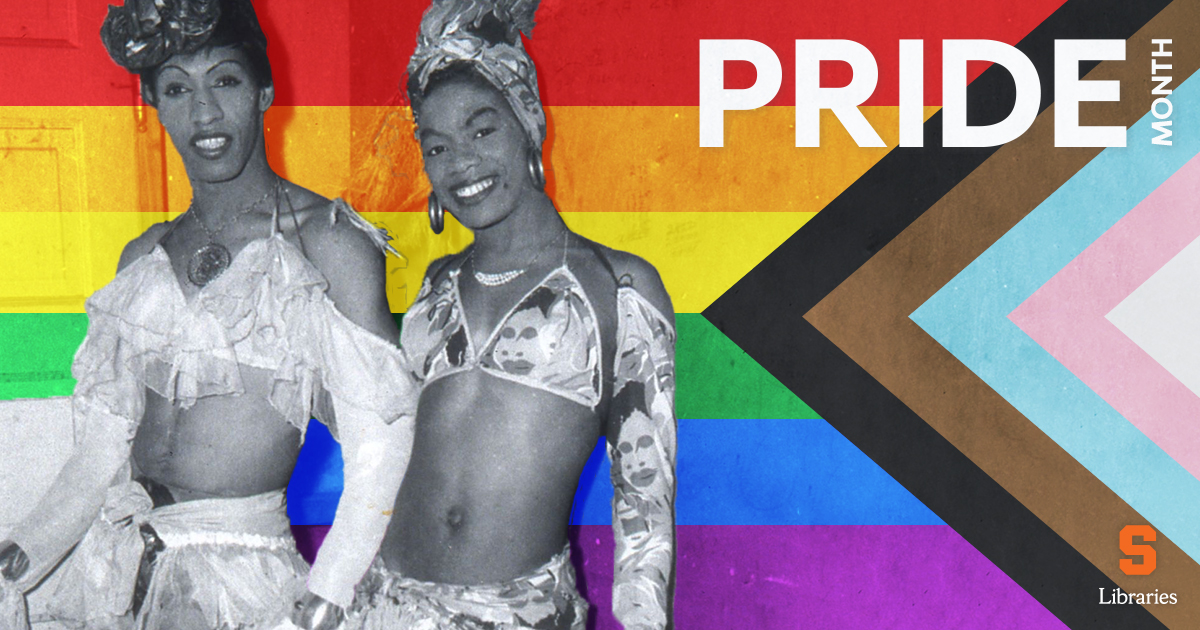 Pride Month is an annual event to honor the Stonewall Riots, which started on June 28th in 1969 in Manhattan, New York. This uprising is a monumental moment in LGBTQI+ history in the United States. At this time, same-sex relationships were illegal in New York. It was also illegal to serve alcohol to people who were known to solicit same-sex engagements. People in the queer community depended on gay bars and clubs for community building and potential relationships. However, police officers would intentionally raid gay bars and clubs and shut them down. The raiding of the Stonewall Inn, a gay club located Greenwich Village, triggered riots that lasted for several weeks, sparking the Gay Rights Movement in the United States and across the world. New York City held a march to commemorate the first anniversary of the riots in 1970. In the following years, cities all over the country held marches to celebrate “Gay Pride Day” on the last Sunday of June. It was a march to demonstrate a continued support of the cause for rights for the LGBTQI+ community. As the march expanded its locations, days, and forms of demonstration, “Gay Pride Day” became what we know today as Pride Month.

Right here in Syracuse, the Central New York Pride Parade and Festival will be held! Pride month festivals are super fun to participate in; there are costumes and makeup, rainbow flags everywhere, drag shows, food and music, and so on. An all-around good time. But it’s crucial to remember that this celebration is rooted in activism, it’s about making our society a better place for queer folks, and we still have some work to do.

On campus, Syracuse University Libraries is also celebrating Pride Month by sharing some of our queer and queer studies collections with the university community! You might notice that our cover photo for this book display is the updated Progressive Pride flag, which has recently included new colors to acknowledge that the LGBTQI+ community is an intersectional one, and when we advocate for queer rights, we have to keep in mind the people in this community who are also affected by their intersecting identities. The books and movies we have curated to share include fun and fabulous reads, because queer joy is revolutionary! We have also included memoirs, documentaries, and academic works that analyze the struggles the LGBTQI+ community still faces.

Stop by Bird Library 1st floor to see the variety of fiction and other books we’ve pulled for you, and check out the slide show there for additional databases, videos, and more.

Paris Is Burning offers a vibrant glimpse into the New York drag and ball subculture during the 1980s, along with the African-American, Latino, gay, and transgender communities involved in it. It examines the system of ‘houses’, which serve as a means of shelter and solace for those who have been kicked out of their homes due to being LGBT. These houses represent a community of friends led by a ‘mother’, typically an older member of the drag scene, and enables members to feel a sense of belonging after being estranged from their biological families.

Watch the documentary through SU Libraries with Kanopy!