A guide for finding government information.

In Celebration of Constitution Day :  September 17 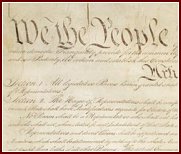 On September 17, 1787, the United States Constitution was signed by 39 of the 55 delegates attending the Constitutional Convention in Philadelphia. Delegates from 12 states had gathered at the Convention with the purpose of revising the nation's first written charter, the Articles of Confederation. Instead, they discarded the nation's first system of government and created a new one they believed would provide the United States with a strong national government to deal with the many challenges of the Confederation. The Constitution was subsequently ratified by each of the original 13 states.

In 2004, Congress designated September 17 as a day to commemorate the Constitution.

To find out more about our Constitution:

Use the Classic Catalog or SUMMON to locate resources like:

Web resources for the US Constitution