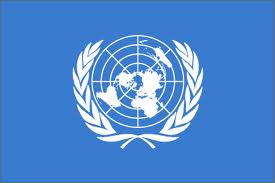 The United Nations is an international organization founded in 1945 after the Second World War by 51 countries committed to maintaining international peace and security, developing friendly relations among nations and promoting social progress, better living standards and human rights.

Dag Hammarskjold Library provides research and information to support the work of United Nations Member States. As an integral part of the UN Organization, the Library also aids in the dissemination of UN information to a wider public audience through online services, and a global depository library network.  See also:  that library's page entitled UN Resources and Documents.

UN Member States on the Record provides links to selected UN databases, websites, and other information resources, in order to make the record of Member States' activities at the UN more accessible.  Information available for each Member State includes: the key documents related to its membership in the UN; statements made before the principal organs; draft resolutions sponsored; periodic reports submitted on Human Rights conventions, and more.

UN General Assembly
The General Assembly, comprised of all 193 members of the United Nations, provides a unique forum for multilateral discussion of the full spectrum of international issues covered by the Charter.  See in particular, links to meetings, general debate, past sessions, and documents.   The 75th Session of the UN General Assembly is due to open in September 2020, though specific details are subject to the ongoing pandemic.

UN -  Economic and Social Council (ECOSOC)
The UN's principal body for coordination, policy review, policy dialogue and recommendations on economic, social and environmental issues, as well as implementation of internationally agreed development goals. It serves as the central mechanism for activities of the UN system and its specialized agencies in the economic, social and environmental fields, supervising subsidiary and expert bodies.  It has 54 Members, elected by the General Assembly for overlapping three-year terms. It is the United Nations’ central platform for reflection, debate, and innovative thinking on sustainable development.  Among others, subsidiary bodies of ECOSOC include the Commission of the Status of Women (CSW).  An important related initiative is UNWOMEN, "United Nations Entity for Gender Equality and the Empowerment of Women," created in July 2010 by the General Assembly as an initiative toward the Organization’s goals on gender equality and the empowerment of women.

UNESCO World Heritage Centre
A convention where signatories are committed to preservation of global landmarks or other areas of natural or cultural significance.

UN - Global Issues
This website offers an A to Z overview of selected global issues, and links to additional information on those subjects.

UNESCO is known as the "intellectual" agency of the United Nations. - See more at: http://en.unesco.org/about-us/introducing-unesco#sthash.kKPjF98S.dpuf

UN - International Court of Justice (ICJ)
The principal judicial organ of the United Nations (UN). It was established in June 1945 by the Charter of the United Nations and began work in April 1946. The seat of the Court is at the Peace Palace in The Hague (Netherlands). Of the six principal organs of the United Nations, it is the only one not located in New York (United States of America). The Court’s role is to settle, in accordance with international law, legal disputes submitted to it by States and to give advisory opinions on legal questions referred to it by authorized United Nations organs and specialized agencies. The Court is composed of 15 judges, who are elected for terms of office of nine years by the United Nations General Assembly and the Security Council. It is assisted by a Registry, its administrative organ. Its official languages are English and French.

UN - Secretariat
The Secretariat, one of the main organs of the UN, is organized along departmental lines, with each department or office having a distinct area of action and responsibility. Offices and departments coordinate with each other to ensure cohesion as they carry out the day to day work of the Organization in offices and duty stations around the world.  At the head of the United Nations Secretariat is the Secretary-General (UNSG).

United Nations News Centre
Portal to a significant collection of news reporting from the UN, including images, video, radio,television and webcasts.

Office of the United Nations High Commissioner for Human Rights (OHCHR)
Mandated by the international community to protect and promote all human rights.  See in particular the "Human Rights Council (HRC)" and the OHCHR "Universal Periodic Review (UPR)," as well as the "Human Rights By Country" subpage (and various country specific pages linked to from box at left margin of that subpage entitled, "OHCHR's Human Rights Programme by Region."). Country specific indexed information exists for these regions:  Africa || Americas || Asia Pacific || Europe and Central Asia || Middle East and North Africa

Yearbook of the United Nations
With annual volumes available for 1946 thru the present, an authoritative reference book style summary based on UN documentation and issued by the UN Department of Public Information.  Includes reference to all major General Assembly, Security Council and Economic and Social Council resolutions and decisions, presented in the context of UN consideration, deliberation and action (the latest volume, for year 2013 - was published in 2018).

United Nations Association of the United States of America (UNA-USA)
A program of the United Nations Foundation, this membership organization's mission aims to inform, inspire, and mobilize the American people to support the ideals and vital work of the United Nations. For over 70 years UNA-USA has worked to accomplish its mission through its national network of Chapters, youth engagement, advocacy efforts, education programs, and public events.

International Atomic Energy Agency (IAEA)
Its founding statute was approved in October of 1956, coming into force in July of 1957, the IAEA reports to the UN General Assembly and Security Council.  Its mission focuses upon global cooperation surrounding the safe, secure, and peaceful use of nuclear energy and related technologies.

International Committee of the Red Cross (ICRC) - War and Law
This "War & Law" subpage from the ICRC focuses on content centering around international humanitarian law (IHL) and a set of rules that seek to limit the effects of armed conflict. IHL protects people who are not or are no longer participating in hostilities and restricts the means and methods of warfare.

International Criminal Court (ICC)
The International Criminal Court (ICC) investigates and, where warranted, tries individuals charged with the gravest crimes of concern to the international community: genocide, war crimes and crimes against humanity.  The Court is participating in a global fight to end impunity, and through international criminal justice, the Court aims to hold those responsible accountable for their crimes and to help prevent these crimes from happening again. ​​The Court cannot reach these goals alone. As a court of last resort, it seeks to complement, not replace, national Courts. Governed by an international treaty called the Rome Statute, the ICC is the world’s first permanent international criminal court.

International Monetary Fund (IMF)
The International Monetary Fund (IMF) is an organization of 189 countries, working to foster global monetary cooperation, secure financial stability, facilitate international trade, promote high employment and sustainable economic growth, and reduce poverty around the world.  Created in 1945, the IMF is governed by and accountable to the 189 countries that make up its near-global membership.  Syracuse University students should also be aware that a substantial quantity of specific IMF statistical data is available within the left margin, 'browse by subject' category  labeled "international" inside the SU Libraries licensed database, Data-Planet Statistical Datasets.

World Bank
The World Bank Group has set two goals for the world to achieve by 2030: End extreme poverty by decreasing the percentage of people living on less than $1.90 a day to no more than 3% AND Promote shared prosperity by fostering the income growth of the bottom 40% for every country. The World Bank is a vital source of financial and technical assistance to developing countries around the world. We are not a bank in the ordinary sense but a unique partnership to reduce poverty and support development. The World Bank Group comprises five institutions managed by their member countries.  Syracuse University students should also be aware that a substantial quantity of World Bank working papers, reports and electronic books are available via the SU Libraries licensed database access to the World Bank eLibrary.