A concise table showing an overview of some key distinctions between different kinds of periodicals (scholarly v. popular, etc.)

Questions you should ponder for most every source you locate

Food For Thought (...brief essay on recognition of reliable sources)

Students of International Relations will know that the existence of the nation-states of the world - largely depends upon recognition of those entities by other nation-states.  Of course, there are bodies of literature in polisci/IR addressing that subject.  But the analogy you can apply to your review of academic books and articles in political science and IR - on subjects pertinent to humanitarian action in global affairs - is that - with increasingly extensive review of current and historical literature in such a field, and related sub-topics - over time, your confidence will likely grow as to which specific journal titles, authors, theories, government agency or nonprofit data sources, policy organizations, etc. tend to get referred to with greatest frequency or (for lack of a better word) "respect" or "recognition" in the discipline and sub-disciplines.

With that increasing immersion, also comes greater ability to recognize which of these sources is genuinely respected in a discipline and which not, which sources tending to be repeatedly referred to (implicitly) as reliable and which not.  Remember, research in these fields takes place within academic "communities," so such recognition also can help you make evaluative judgements.  Do not switch off 100% of your common sense either, since even the most highly respected sources and scholars may sometimes make errors or arrive at what (in your view) may seem to be odd conclusions.

No one evaluative rubric for source evaluation is ironclad - few are hard and fast in all situations.  Web sites with typographical errors may at times convey crucial and novel analysis.  A newly minted scholar in IR or newly launched academic journal in poli sci - with not much of a long track record in the field - may not have a long respected reputation, but may still offer valuable content.  Likewise, a top ranked academic journal in any field, will tend to get the attention of scholars and students in that field when one of its articles addresses a topic of interest.  Nevertheless, pointing to such sources as generally respected and reliable does NOT equate with your having to always "agree" with conclusions of those articles or the methods they employ.  Often you may find such agreement.  But the bedrock occupation of any research process - is - by definition - often that process wherein you see the work of colleagues in that field (and sometimes in other fields) - respond to that work, accept, synthesize, dissent, criticize, support, replicate, etc.  Of course, as your own knowledge in a field and subfield grows, it is very valuable prior to being highly critical of a specific source - to also have some general notion of the reputation of that source among the others who are most often researching and publishing within that discipline.  Lastly, because a major periodical or journal or newspaper source is highly respected, has a high "impact factor," as a WHOLE, does not always mean every individual article therein will be equally respected or somehow beyond criticism.

(..and impact factor rankings for top journals in PoliSci and IR)
By no means required for this PSC400 course, but at a capstone level - if you are interested in viewing some respected rankings of top scholarly journal titles in either "international relations" or "political science" or "anthropology" - a database called Journal Citation Reports - allows you to select one of those categories and then pull up a ranked list of these journal title names - ranked by what is know as "impact factor" in those disciplines.  Just be wary that rankings of any kind (top academic journals, top partying universities, etc.) are never without controversy.  In academia, journal rankings also tend to discriminate against newly launched journal titles as well as against highly interdisciplinary titles (both of which may contain valuable research findings).  Still, Journal Citation Reports impact factor ranked lists will give you a general sense of the relative ranking of some top journal titles.  And any student perhaps planning on doing some graduate level work (if applicable) should have a sense of what journal titles appear on these types of lists.

USE THE 'JOURNALS' LINK AT THE SU LIBRARIES WEBSITE TO SEE WHICH OF THE LISTED HIGHLY RANKED JOURNALS ARE AVAILABLE AT SU, AND WITHIN WHICH DATABASES.

ALTHOUGH NOT RECOMMENDED AS ONE'S SOLE RESEARCH STRATEGY, YOU CAN ALSO ENTER SOME OF YOUR KEY SEARCH WORDS INTO SEARCH ENGINES FOR THE HOMEPAGES OF SINGLE SPECIFIC, HIGHLY RANKED JOURNALS IN THESE FIELDS.

FINAL CAVEAT:  Just because a journal publication is highly ranked does not mean it will necessarily be useful on any one research topic.

"Fake News" has become a highly charged phrase in the current U.S.political discourse and debate.  While you need not agree 100% with some opinions implied by this chart, Colorado Patent attorney, Vanessa Otero, received some viral attention with her highly detailed attempts to map out specific news (i.e., journalistic) sources- across a spectrum of trustworthiness and reliability.  For context on her reasoning behind this chart, which is certainly opinionated, visit her blog post entitled:

The Chart, Second Edition: What Makes A News Source “Good?” 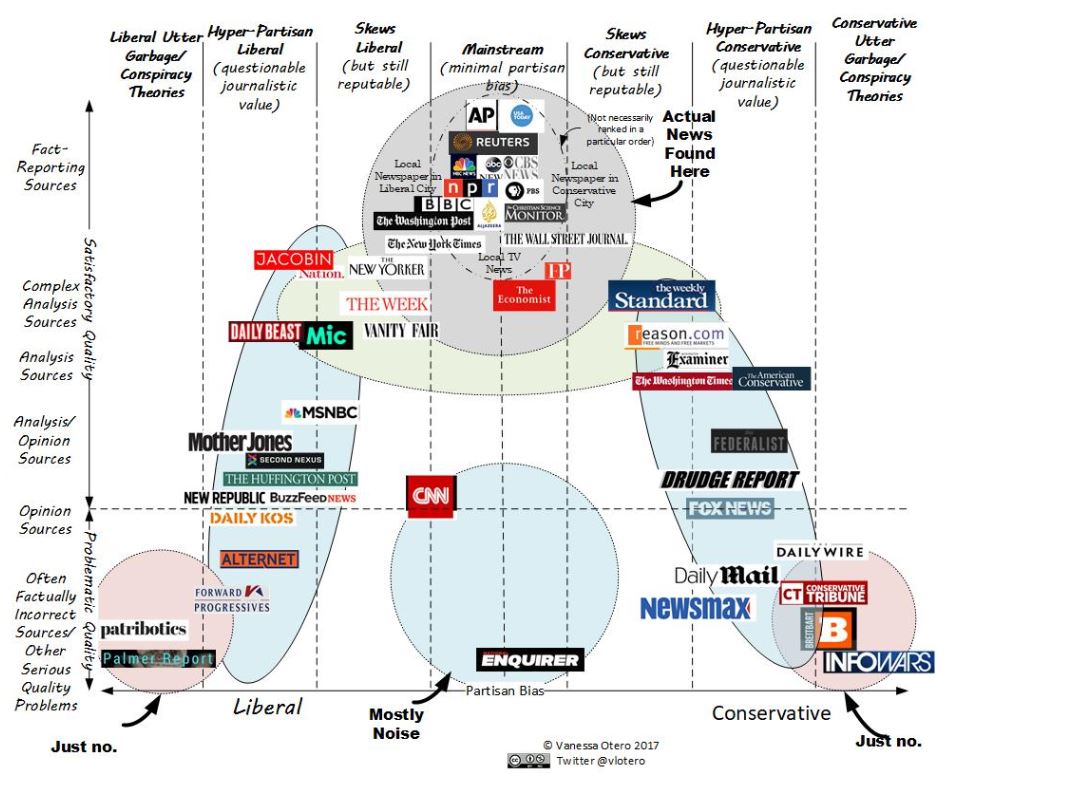